A student who walked from Nsukka town to Enugu in order to meet the new governor, Rt. Hon. Ifeanyi Ugwuanyi, was turned back after completing the 50 kilometre marathon.

A student who walked from Nsukka town to Enugu in order to meet the new governor, Rt. Hon. Ifeanyi Ugwuanyi, was turned back after completing the 50 kilometre marathon.

Asogwa Stanley, a final student of the University of Nigeria, Nsukka (UNN), completed his 50 kilometre marathon on Monday evening, after taking off around 8am the same day. 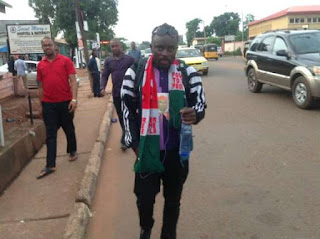 He jogged to some prominent places in the coal city before he proceeded to the government house where some friends and well-wishers were there to welcome him.

Unfortunately, Stanley was security men at the gate told him that Ugwuanyi and his Deputy were absent.

But his ardour was not dampened by what some will see as a disappointment.

He told journalists that he is happy for the governor's election victory and the trek was his own way of showing his joy.

“it gives me much joy that Nsukka man eventually became the Governor of Enugu State," Stanley said.

"I want to use the race to express my happiness on the development”.

“As a student, I don’t have money to organize events for him like others might have done, but I know I can embark on this distant race and I have succeeded in doing so.

"I really thank God for giving me the strength”.

He assured Ugwuanyi that the youth are behind him as he takes charge in the state.
2:35 AM
Nigeria Entertainment News