24 hours to the end of their tenure, members of the Nigerian Senate passed 46 bills in less than 10 minutes, a situation best described as a 'historic moment'. The Senators will be ending their tenure as tomorrow June 4th to give rise to the 8th National Assembly. 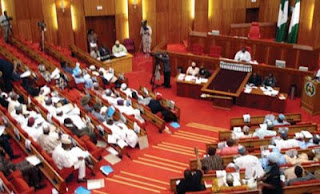 At today's plenary session, the Chairman, Senate Committee on Rules and Business, Senator Ita Enang, announced all 46 bills before the house and then Senate President, David Mark, immediately called for votes on all the 46.

He gave consent to all the "Ayess" which resulted in a rowdy session as those who were against the manner in which the bills were passed voiced their objection. The Senate President however told the aggrieved Senators to come tomorrow for consideration.
10:35 AM
Nigeria Entertainment News